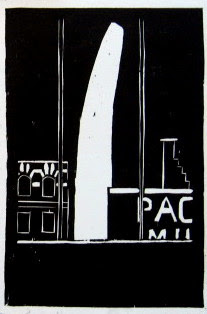 One of the art history classes was spending the day in St Louis, mostly checking out some stuff at SLAM, under the guidance of Prof Jed Jackson. Some of the other grads, myself included, took advantage of the offer to tag along for fun in the big city. Saw art, bought bread and records, went to a bar. Riding home late on some city highway I noticed what appeared to be a brightly lit concrete smokestack, tapering slightly toward the top. As we continued to drive the top seemed to suddenly bend before my eyes. Was it toppling? No, the bending continued a little more until the spotlights finally revealed another matching piece. Turns out I had seen the edge view of the St Louis Arch.

Posted by arrabbiata at 4:54 AM