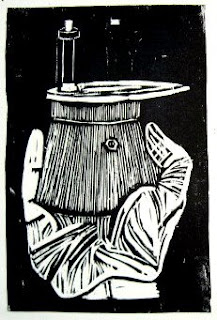 Grad painter Kendra had taken a part time job in an outdoors equipment store near the campus, and sometimes I would stop there to talk to her. I saw this odd metal object on display and investigated. It was called an "expresso" pot. I don't know if that was the common mistaken spelling/pronunciation often seen in those days before our nation became coffee obsessed, or some kind of trademark. Either way, I guess the idea was to not let being in the wilderness keep you from having really strong coffee.

Posted by arrabbiata at 5:17 AM