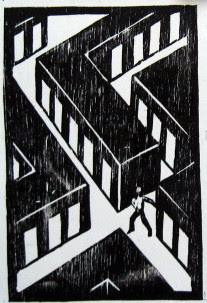 Went looking for some kind of organizational meeting in Faner Hall and got lost. This was common. Faner is a classic example of early 70's Brutalist architecture (find definition and photo of Faner here), a large geometric poured concrete building with almost all of the classroom/office spaces on the upper floors, accessible from ground level entrances that were no more than stairwells and elevators. Within it was a maze of corrodors at odd angles with occasional dead ends, different sections sealed off from one another. Adding to the problem was that you could not walk from one end of the building to the other inside, but rather had to exit the building, find the stairway that led to the section you were seeking, and re-enter the building there. The rumor was that the building was designed to be riot proof, following some radical activity that had resulted in one campus building burning down. After this, if I ever had a class in the building, I went the day before to scout the location, to guarantee I could be in class on time.

Posted by arrabbiata at 7:25 AM