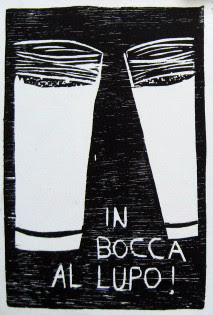 Out drinking with some of my fellow art grad students at the On The Island Pub (so named because it was situated on a large traffic island where Route 51 north and south split apart for a block). It was a Chinese restaurant upstairs and bar downstairs, one of those favored by my crowd. At one point our international group were exchanging toasts from our varied countries of origin and I contributed this one. In bocca al lupo is an Italian idiomatic expression that means literally "into the mouth of the wolf", but is commonly translated as "good luck". Not strictly a toast, but it worked here, too.

Posted by arrabbiata at 5:55 AM