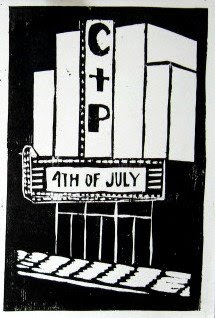 The premiere of my animated 4th of July film, along with all the other films made by students for the experimental film class. As I have never owned a 16mm projector, it would also be the first time I'd see it. I was hoping to make it longer, include all the days up through the end of April, but the time consuming nature of drawing 24 frames per second, meant I only got up to the end of November, about 5 months worth of prints. Even with my opening and closing credits, that meant the whole film was barely over a minute. It was so short, that by the time they finished focusing it, it was pretty much over, so it was run a second time. I was pleased with the results, and it got a good response from the class and professor.

I modelled the image on the Varsity Theater on the strip, a typical Main Street type theater that every town of significant size used to have, now most closed by competition with multiplexes. This one also closed a few years ago, but at least the building will be refurbished and used as a home base for local theater companies and other arts uses.

Posted by arrabbiata at 6:46 AM