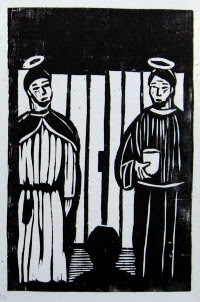 The feast day of SS Cosmas and Damian, twin brothers of Arabian birth, who studied medicine in Syria, and were well known for their skill in medicine, and for never accepting a fee for it. They were martyred and are among the saints who are patrons of those who practice medicine. But they also have a specific significance in my family. A few generations back, a family cousin was wrongly imprisoned, an identity confusion I believe. He prayed for help. One night he was visited in a dream by Cosmo and Damiani (as they are known to Italians) and told not to worry, he would be freed the next day. Sure enough, the next day the authorities realized that they had the wrong man he was let go. I'm told that for many years after that the immediate family honored the saints by attending a yearly mass at a church in New York City dedicated to the pair.

Posted by arrabbiata at 8:45 AM