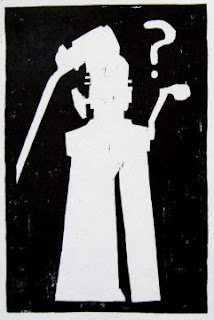 John Siblik was kind enough to lend me his tripod a few days earlier when I was shooting slides, and wanted it back to shoot some of his own. The problem was when I went to my studio to get it, the tripod was missing. Bad enough if something of my own was missing, but I felt worse because it wasn't mine to begin with. An investigation was launched, and it turned out that another grad, aware that I had the tripod in my possession, had broken into my studio (climbing over the 8 foot wall) and helped himself to it. The tripod did find itself back in its owner's hands before the day was out, but after that he kept it safely at home when he wasn't using it.

Posted by arrabbiata at 6:35 AM