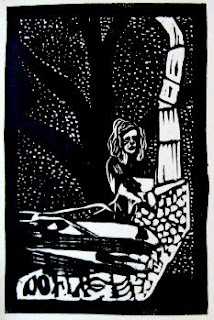 The day of the annual Cardboard Boat Regatta. This was a class requirement for the 3D Foundations class at SIU every spring, a major campus event for all students (any student could participate), and a regional news story for national television networks. The rules were that boats could be made from corrugated cardboard, glue, and waterproofing materials, decorated in any way you want, but not metal fasteners allowed of any kind. Also, all boats had to participate in at least one race around the campus lake. (life vests and a motor boat were employed to help out those students whose boats proved unseaworthy) Trophies were awarded in various categories- design, racing ability, most spectacular sinking, etc. Some boats were small, some large enough to have a crew of several students. The one in the image was a Viking style boat in the shape of dragon, tail at least 10 feet tall, the head about 8 feet high when attached, with a crew of at least 4, constructed by my former student Amy Kucharik.

Posted by arrabbiata at 7:09 AM