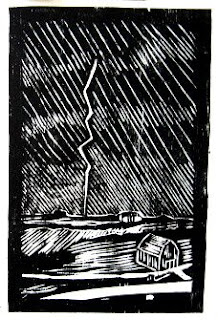 Print professor Joel Feldman and his then wife Cheonae Kim had simultaneous solo shows at a non-profit gallery space in St Louis, the Forum for Contemporary Art. I decided to go the opening on this night, driving a few other grads in my car. The show was good, but a huge storm blew in on the way home. My car temporarily stalled out after driving through unavoidable deep water, but I eventually found my way back to the interstate and into Illinois. The way home was a long drive on an unlighted 2 lane country road, much at low speed because of the visibility problems caused by the heavy rain and lack of light. (except for the frequent lightning) My image for the night was the storm I drove through in the big sky flat lands, before the rain eased up a little and I hit the undulating hills of the river valley country.

Posted by arrabbiata at 7:42 AM