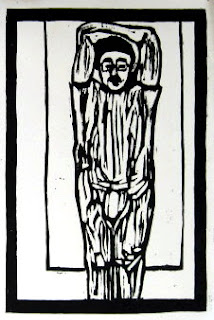 Plastered, literally. After being liberally smeared with cold cream on all surfaces that would come into contact with plaster, the process began at my feet. Laura dipped sheets of cheesecloth in plaster and started wrapping the front half of my body as I stood on a tarp. A few layers would be applied, then the process gradually creeped up the body. Three large tubs of plaster would be mixed to make enough for the mold. The process stopped at neck level. Although that much plaster was heavy, the mold supported itself. After letting it sufficiently cure, the mold was walked forward while I backed out of it. The resulting mold continued to stand on its own, supported on the wider base of plaster around the feet.

Posted by arrabbiata at 7:13 AM