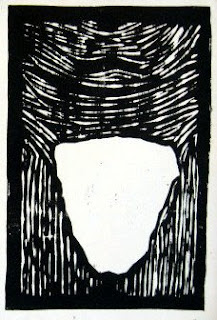 With the plaster body mold of me completely cured, Laura put it to use. She painted the entire inside with melted beeswax, eventually building up a layer about a half inch thick. After it cooled, she carefully lifted it out of the mold. Not carefully enough, because one part remained stuck in the mold- the whole groin area. (I guess the contours were too difficult) The result was a life size figure of me missing this one section- a very disconcerting sight. She later peeled the missing pieces out a section at a time and reattached them to each other and the rest of the mold with more melted wax. Not a perfect match, but since the whole figure would eventually be covered with pieces of cloth (swatches of colored/patterned cloth about 8" square, dipped in the same melted wax, so they bonded directly to the figure), it didn't really matter. After the cloth, eventually she coated it both sides with an acrylic polymer to provide a protective shell, a glossy exterior, and some stiffness, since the figures in this series would be standing.
Posted by arrabbiata at 10:08 AM