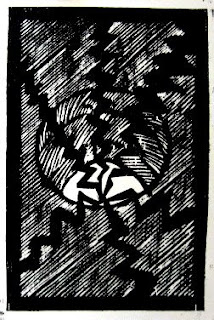 One of the legacies of having a studio in a building previously used as a factory is that there is occasionally evidence of the previous occupants. In the case of my assigned studio space, that meant a 3 inch diameter hole in my floor, through to the studios below. Probably made to allow a pipe to pass through in its previous life. It sat by the edge of the wall, where it was generally of no consequence. On this night, however, a problem. The first floor was assigned to 3D students, figuring they would be less able to move all their materials upstairs. Someone down there was making an ungodly racket, cutting and/or grinding metal. Probably Steve Peters working on one of his fabricated steel constructions. I'm not saying it would have been silent if my floor had no holes, but I think the noise would have been at least a little more muffled.

Posted by arrabbiata at 4:50 AM