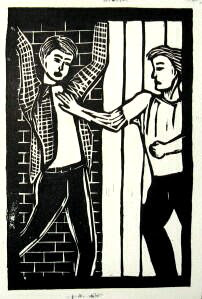 I was walking up the Strip one evening and passed an arcade/game room that mostly was a hangout for locals. Outside the building I saw two guys having a fight- fists, etc. This was not unusual in Carbondale, though it was more common around bars. For example, I saw one spill out of Sidetracks, and one fighter throw another into traffic in the street (luckily slamming into the side of a moving car rather than falling in front of it) or seeing another one involving two women in the parking lot at Muggsy's, where one dragged the other out of a car and started pummelling her. By comparison, this one seemed like an ordinary disagreement.

Posted by arrabbiata at 5:21 AM