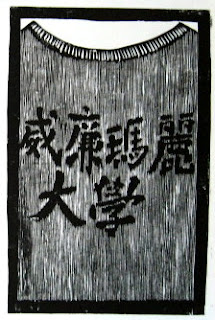 When I was a student at the College of William and Mary, I purchased a t-shirt from the school's East Asian Society (a student club), which had a dragon on the front, and these Chinese characters on the back, which they said was the name of the school in Chinese. Several years later I was at Southern Illinois University, which had an above average foreign student population, including many from Asian countries- Japanese, Chinese, Korean, Thai, etc- at least some of which was the result of the school's campus in Japan. In the spring 1994 semester one of the print classes included a music major from Taiwan, who I used to talk to occasionally. On this day I brought in the shirt and without telling her what I was told it said, asked her to translate it into English. After a few moments, she told me that it said "William and Mary College", but that it was wrong, made no sense. I figured this meant that the translation worked phonetically, but that the character choice was illogical.

Posted by arrabbiata at 7:27 AM